Back On The Saddle Again

Due to the recent demise of my 1968 Raleigh Grand Prix, I really haven’t been bicycle riding much. By demise, I mean that every time I took it out for a short spin something would break! It got so that I didn’t really want to risk riding it, or going through the pains of listening to it creak as I rode. 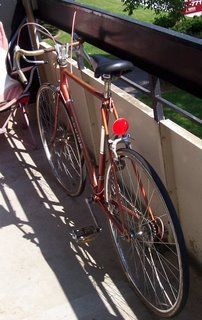 Upon hearing of my plight, a coworker mentioned that she had an old 10 speed her husband had left outside to rust after purchasing a new bicycle. She kindly brought it into work where it sat for a week while I figured the best way to move it.

First attempt involved inflating the tires – they where both flat. This resulted in the air shooting straight back out on the back wheel! The valve was missing the center-pin entirely, which I neglected to notice at first. The front tire inflated with no problem but it turned out to have a slow leak and was flat by the next morning.

No problem, grabbed an inner-tube out of my Raleigh’s front wheel and replaced the totally dead one at work. Inflated both tires, adjusted the seat and started peddling up the road a bit to my girlfriend’s house. It sat there overnight and I strapped it to a bus in the morning and hauled it home for the real work to begin.

The bike is a 1970’s (I think) model of Sekine, made in Canada. Let me tell you, this thing was in rough shape. Rust was making it’s insidious way around the bike, and more than a few parts where inhabited by dead spiders and seized. I’ve dealt with worse – you should have seen the Raleigh ten years ago, wow. 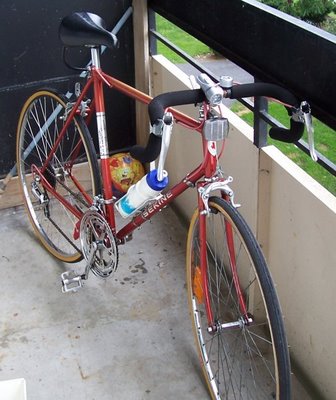 It’s been two weeks and a pretty penny spent on new tires, inner-tubes, grips and a headlight. However, the bike now rides great and has already been under my butt for a few hundred kilometers… Oh, which is where all my free time has been lately – hence the lack of posting.